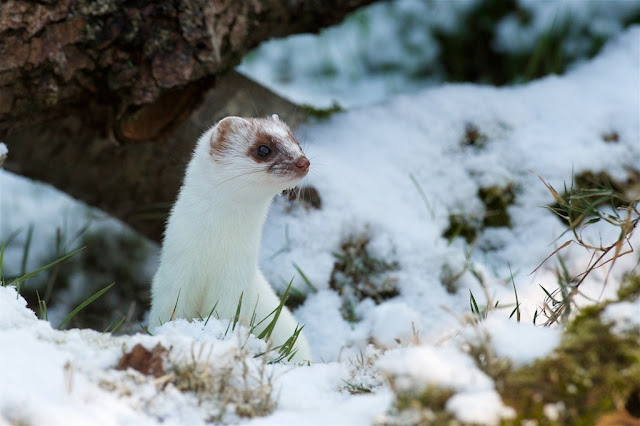 The Centre was extremely busy over the last year, except for a few weeks around Christmas we were pretty much fully booked, even the evening groups over the late Spring/Summer period seemed to be more than usual. All great for the Centre of course, but it does leave less time for photography. Looking through some pictures from last year, and it seems I took far less than I have in the past. But still, here are ten of my favourites from 2018 starting above.

1. Susie the stoat in ermine.
I love stoats, and I love Susie! It may sound strange to hear, but all our stoats we have ever had all have their own little personalities, and Susie is a real star. Shyer than our others, but worth hanging around for as she is a real beauty. Last year she turned ermine again, almost completely except a few hairs around the eyes, and we were lucky enough to get a little dusting of snow for a couple of days. It took a long time waiting for her to come out, a long time waiting for her to go where I had my camera set up, and a lot of luck to get the photo quick enough before she moved, but I think it was worth it. Yay for Susie, the sexy stoat! 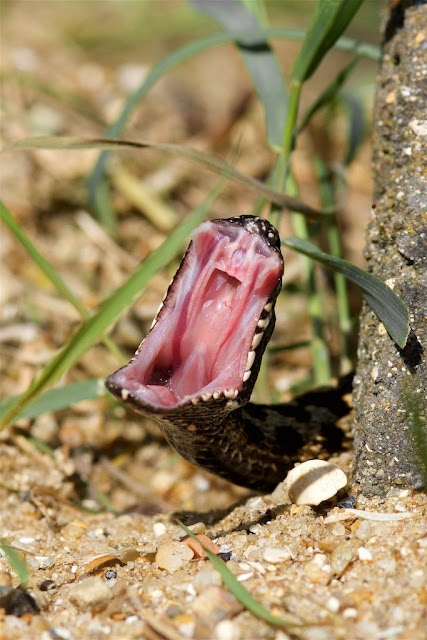 2. Adder yawn.
A photo I have been after for many years, but it takes a lot of luck to be there at the right time. I wasn't even trying to photograph this, I was watching them 'dance', and talking to one of the keepers at the time. Out the corner of my eye I saw this adder start to move it's jaw and thought it may yawn, so grabbed my camera by my side, laid down and just fired off a lot of shots no time to worry about settings. I got lucky, very lucky! 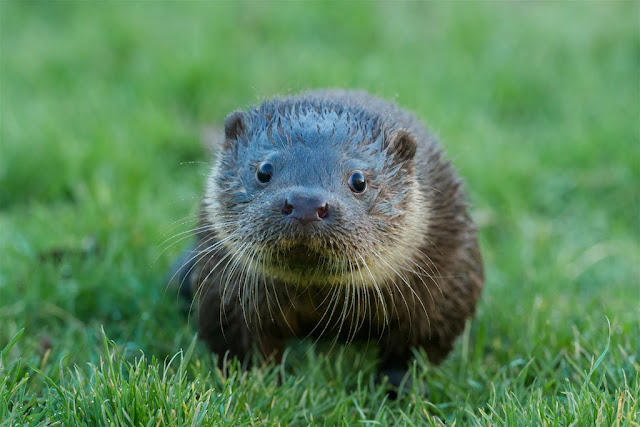 3. Harry the otter cub.
Harry was a special little otter cub, and it was touch and go at one point whether I was going to take him to hand rear him. He was seen out of the holt very early on several occasions, once just sat in the cold running water of the sleuce, once right by the fence and my feet during a keeper talk, at one point he even went back in to the holt and mum dragged him out again. If it was Emmy's first litter I think I would of stepped in, but being a seasoned mum we left her too it but kept a very close eye. The real moment of indecision came when he fell into the sleuce during a keeper talk and Emmy just left him. I was confident that she would get him after she had finished eating, but the running water was ice cold, he seemed distressed and so did the public watching. I picked him up, towelled him off and put him back in the holt. It was almost like he remembered the helping hand, as in the photo above he and his sister were running by me as I was laid on the ground. She was very hesitant and then sprinted past, where as Harry nonchalantly walked by and even came up close to me here. 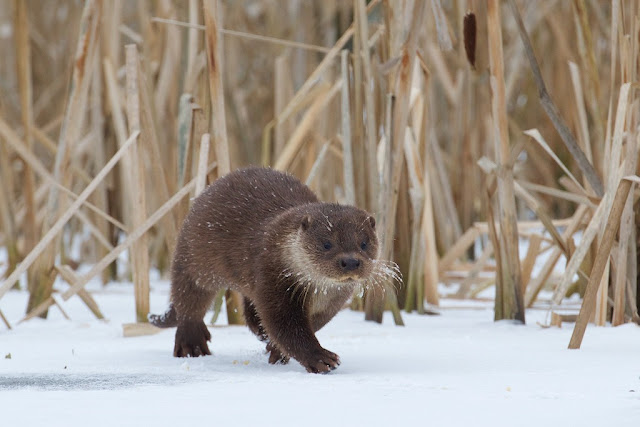 3b. Otter cub on ice.
Ok, cheating a little, but another otter cub one. This time running on the ice during the Beast from the East at the beginning of last year. 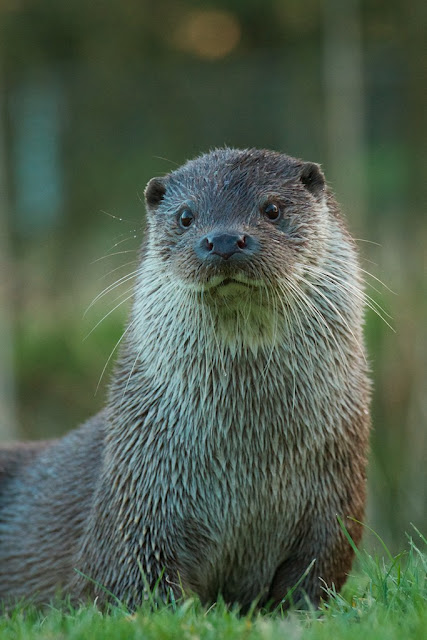 4. Jake.
Our main pond is used for most of the talks and tours we do, and Buster in the middle pond is a good back up. Not many people get to meet Jake in the third pond, they may see him sleeping in the observation holt, but not stay on long enough to see him come out to feed at the end of the day. He really is a handsome chap, just like his brother Elwood. This portrait was taken on a dark evening before leaving work. 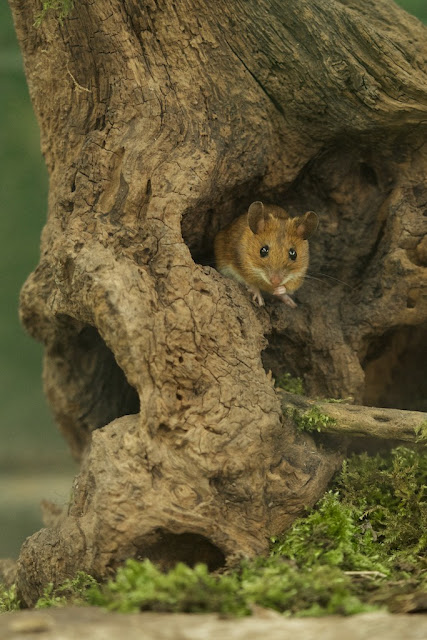 5. Yellow neck mouse.
Our mice and voles in the hedgerow have been perhaps the best ever over the last year. They tend to be more active earlier and later in the day, but do have spells throughout the rest of the day too. Our yellow neck mice in particular have been real stars, and a lot of people stop at their enclosure for some photos. This is one of my favourites of them from last year. 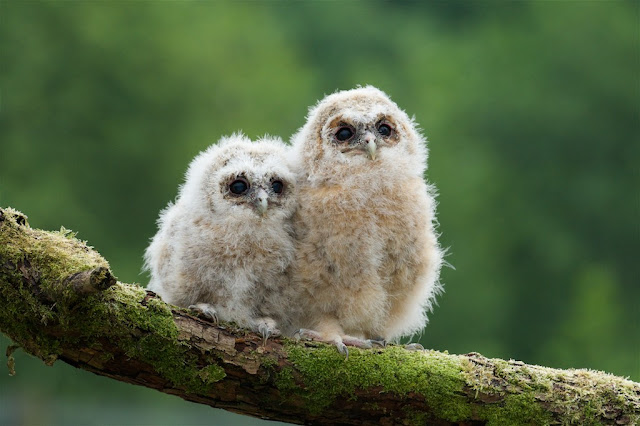 6. Tawny owl chicks.
Last year was the first year we have bred tawny owl chicks. The first year we had no success, the year before last the female laid eggs but nothing happened, and last year she hatched out three chicks. Keeping an eye on them and we weren't sure that the mother was looking after them correctly. She was certainly keeping them warm, but we were not confident she was feeding them. Having a closer look one day we saw a pile off food in the corner. It was being collected, but not being fed to the chicks. We decided to remove them to hand rear early, and lucky we did. Unfortunately one had died already and the two above where not looking great. It was touch and go for a few days, but they pulled through and are now looking great! 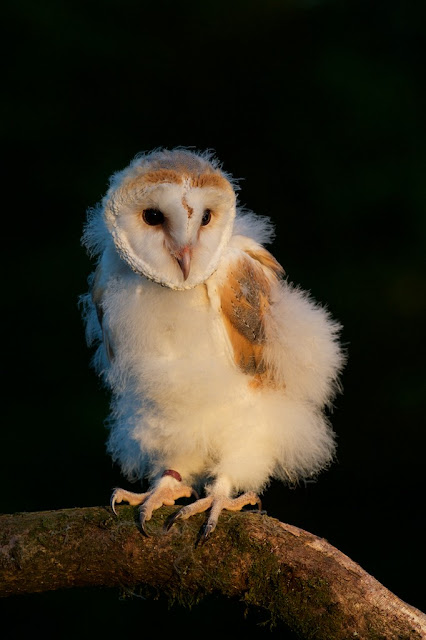 7. Floki the barn owl.
Another chick another story, and how we got Floki is quite a story, but one for another time perhaps. In short Floki is a barn owl that we collected when he was only a week old from local owl breeder. Above I was photographing him one evening in the lovely light on a perch in my back paddock. He is so friendly though, that by the time I put him on the branch and walked away to pick up the camera he had jumped off and followed me to sit on my lap. I did manage to get a few when I was quick enough though, and this one I particularly like. You can still see some baby fluff through the adult feathers. 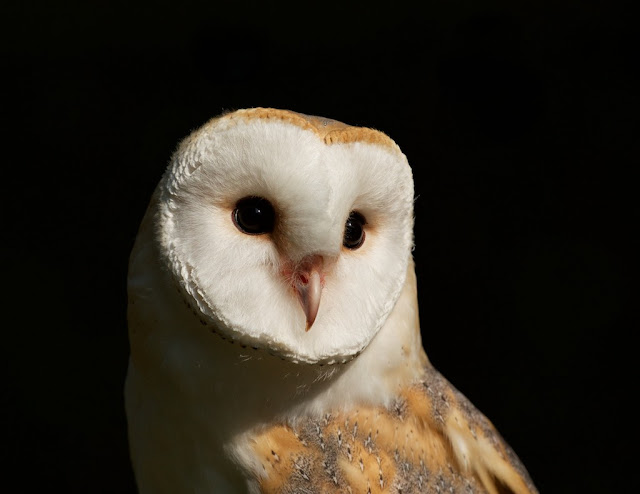 7b. Adult Floki.
Cheating again, but you can really see the difference in Floki now he is mature, and what a beautiful barn owl he has become. 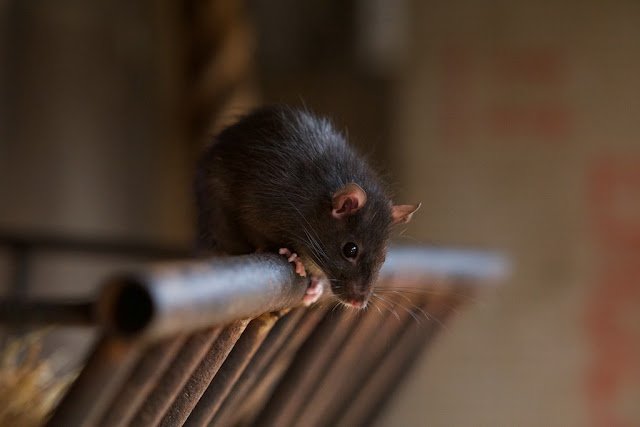 8. Stevie McQueen the Black rat.
Black rats are beautiful, they really are. If you have only seen brown rats and/or have a slight fear of them, come and see our black rats. They are sleek, agile, athletic, very different looking to the brown rat. If a rat was cute, the black rat would be it. I took a lot of photos of our black rats at night last year, the first time I have done that, and although very difficult for many reasons, got a few that I liked. This one above possibly my favourite. I definitely think I will be trying this again this year at some point. 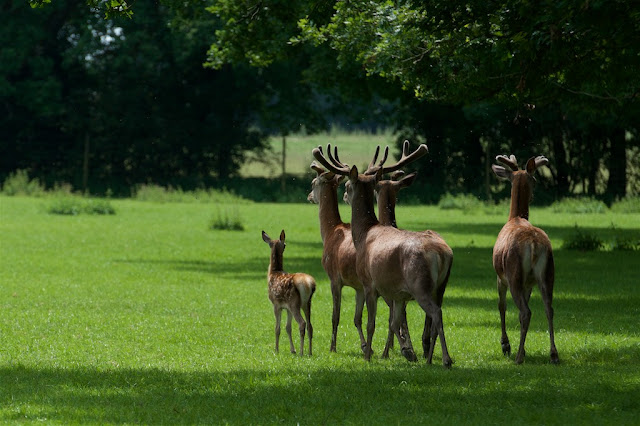 9. Red deer boys.
Not the best photo, but one I like. I can't remember why I was out in the paddock to be honest, but I guess I had been asked to photograph something by the office as I obviously had my camera with me. While driving around the deer split in to two groups with the males heading off one way and the females and calves another. This little male calf decided to stay with the boys though, must have thought he was big enough to be a big deer! It was lovely to watch, and when they did go back to the rest of the group it was the little male that lead the way! A master stag in the making. 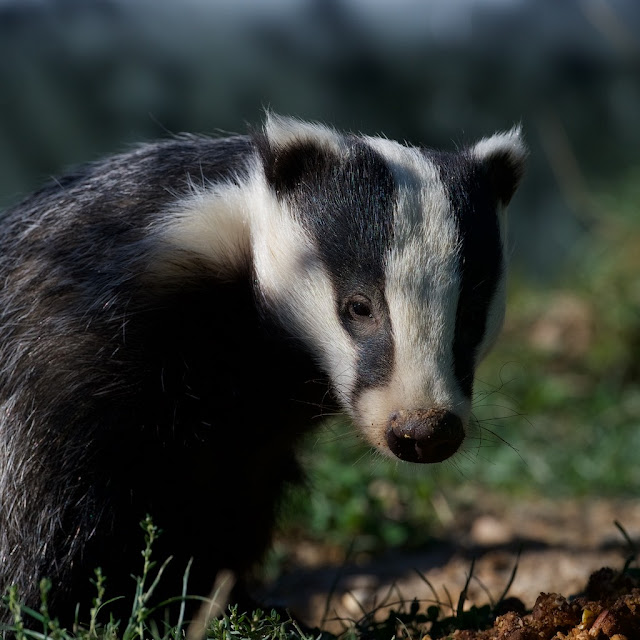 10. Stanley Brown the badger.
I had to include one of our new badgers. This is Stanley Brown, and he really is a character, he is the one you may have seen me feeding custard creams to as a treat. He came to us a rescue with two young females. We continued to hand rear them for a little while, although most of the hard work had already been done by the rescue centre, and then let them settle down in to their new home. Recently, making use of the winter months when they are less active, we slowly introduced them to our other two badgers and they are now all living together in the main sett. They rarely venture out this time of year, but if you do come to the Centre you can see them all snuggled up in the observation sett.